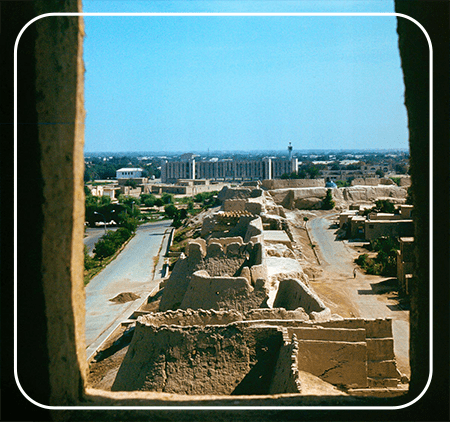 Day 1: Tashkent- Nukus
Welcome to Nukus! Today you will have a flight to Nukus in the morning. Nukus city is located in the north-western part of Uzbekistan, surrounded by a desert.Nukus is called the second capital of the Republic with perspective economy, scientific potential, a transport network, the cultural and sports centre.Today you will have a full day city tour in this city.  In course of the tour you will explore the Museum of Savitsky which exhibits the masterpieces of forbidden art. The curator of the Karakalpakstan state museum of art gathered the artworks in 1960s. He cautiously kept and finally presented them in this far apart central Asian art-house.  The museum of arts is the treasury, providing guidance on a cultural piece, since III century B.C. Museum of arts today knows the whole world - thanks to attention of leading mass-media of the European countries. Museum collection recognise the second in the world on the importance and volume among collections of products of Russian avant-guard, and also the best art collection in the Asian region. Then you will head on outside of Nukus to see Mizdakhan necropolis. Before ancient city, nowadays archaeological and architectural complex. The main sights are concentrated to 3 hills and plain between them.which used to be an ancient city centuries ago. Night is in a hotel.

Day 2: Nukus - Ayaz Qala - Tuprak Qala - Khiva (290 km, 6 hours)
Today you will embark in a thrilling day! You will start your day with driving to  fascinating. It is open-air museum , with perfectly remained ancient architecture and protogenic charm.  Its history is inextricably connected with the history of the legendary Khorezmshah's State with its capital in Urgench before. In the blossoming Khoresm was the largest world trade centre, key point on the Great silk way. The mysterious city of Khiva could preserve an exotic image of east city in an ancient part of a city.Now we have most of this unique city preserved and cherished to pass to our next generation. On the way we will visit two famous fortresses: Ayaz Qala and Turpak Qala. Ayaz Kala, Tuprak Kala is the ancient fortresses located in territory of Karakalpakstan, autonomous republic as a part of Uzbekistan. The site of ancient settlement of Ayaz-kala is a historical monument of Zoroastrian times and is dated IV BC. the Fortress settles down on a flat surface of the hill, bordered with steep slopes. . Fortress dates back II century AD. The name is meant by "a red fortress" as it is beautiful in sun beams on a decline in the evening. Overnight is in hotel in Khiva.

Day 3: Khiva - Urgench - Tashkent
You will have an amazing city tour today in the oldest city of Uzbekistan.   Internal city of ancient Khiva (in Uzbekistan), the well-known architecture and history. Erected within centuries fortifications and palaces, mosques and madrasah, the mausoleums and minarets, caravans-sheds and baths have transformed Ichan-Kala into an wonderful city-monument. Ichan-Kala is recognized object of the World heritage of UNESCO. Ichan-Qala consists of over 400 traditional dwelling houses and about 60 architectural monuments. The most prominent points in it are the Kunya-Ark fortres, Kalta Minor minaret -real symbol of city that in transfer means "short minaret" and Tash Khouvli palace. In the end of the tour you will have evening flight to Tashkent. Overnight is in a hotel.