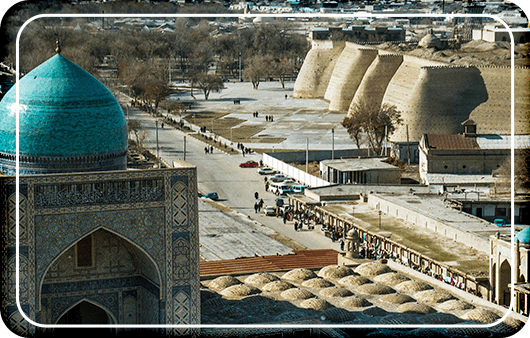 Day 1: Tashkent- Nukus
Today  you will have a flight to Nukus. Kick start the day with a leisurely walk and discover some hidden charm of Nukus. Nukus is the capital of the Autonomous Republic of Karakalpakstan. The autonomy is part of Uzbekistan and is a well-developed region. Your first wonderful destination will be the Museum of Savitsky which exhibits the masterpieces of forbidden art. It is the second-large museum in the world of Russian avant-guard. The state museum of arts in the Republic Karakalpakstan has been based on February, 15th, 1966 in the city of Nukus. At first it represented two small rooms, one established post. The museum collection is so unique that can brag all over the world. This place named by famous Russian artist Igor Vitalevich Savitsky. The museum collection totals nearby 90000 masterpieces. The history of creation and museum development is unique. In course of the tour we deport outside of Nukus to see Mizdakhan necropolis- the whole complex of archaeological monuments, the top of the western hill is topped by ruins of a fortress of Gzaur-Kala constructed in IV century B.C. En route you will explore a 2200 years-old Zoroastrian ancient monument known as Chilpyk. Night  will be in a hotel.

Day 2: Nukus - Khiva
In the morning you will depart to Khiva. There is the option to observe all wonderful highlights in the oldest city of Uzbekistan. Khiva is the fine city-oasis, which is situated near to Karakum desert. You will go inside of Ichan-Qala, the historical internal city of Khiva surrounded with powerful walls in Uzbekistan. The mysterious city of Khiva could  keep an exotic image of east city in an ancient part of a city - Ichan-Qala where are located numerous monuments of architecture. Ichan-Qala consists of over 400 traditional dwelling houses and about 60 architectural monuments. Fortress Ichan-Qala is entered in the list the world heritage of UNESCO. Here there is a significant amount of architectural monuments: Khan palaces, mosques, madrasah, mausoleums, and minarets. The most remarkable sites in it are the Kunya-Ark fortress dating back to 17th century, Kalta Minor minaret and Tash Khouvli palace, an incredible sample of Khorezm architectural masterpiece of 1830s. Night is in a hotel.

Day 3: Khiva - Bukhara
Early in the morning we will have transfer to a fascinating city of Bukhara.  Bukhara is one of the most known and outstanding cities in Central Asia. It is a wonderful city-museum where a considerable quantity of monuments of culture and architecture of different epoch is concentrated - more than 140 constructions and buildings only the Middle Ages. The road from Khiva to Bukhara goes through famous Kizilkum desert. The name "Kizilkum" can be translated from Turkic as " Red Sands». In  the tour you will feast your eyes with fascinating  view of Amu Darya river, the largest river in Central Asia . Amu Darya  is very whimsical and constantly changes the current. The channel dries up and appears again in other place, as a result there are islets and lakes. Upon arrival in Bukhara you will have free time. Night will be in a hotel.

Day 4: Bukhara
Every day is a new adventure! And today you will have a chance to enjoy of walking around the most prominent sights of Bukhara. Your first destination will be the most ancient citadel in Bukhara named Citadel Ark; the fortress is famous for the monumental appearance, and also that in its walls at various times lived and worked great writers and scientists Omar Khayam, Avitsenna, Firdousi. In course of the tour you will discover Chashma Ayub, the cult building in the centre of Bukhara, includes the mausoleum and a sacred spring.  After you will marvel along the shopping domes and visit one of the most famous madrasahs of Bukhara, Nodir Divan Begi. Madrasah Nadir Divan Begi in Bukhara, entering into architectural ensemble XVI-XVII of centuries Lyabi Hauz. It has been constructed in 1622-1623 by vizier Imamkuli Khan Nadir Divan Begi as a caravan-shed. In the conclusion of the tour you will experience Kalon complex, the unique sample of architectural art of Bukhara. It consists of three structures built in the 12th - 16th centuries: Kalon minaret, Kalon mosque and Mir Arab Madrasah. Night will be in a hotel.

Day 5: Bukhara - Samarkand
Today you will drive to Samarkand.  It is possible to name Samarkand one of the oldest and ancient city settlements of the Central Asian region. Throughout centuries Samarkand was key point of the Great Silk way and served as a crossroads of cultures of the East and the West. You are going to have a nice tour today, you will explore the most remarkable sights such as Registan square, Shakhi-Zindeh, Mausoleum Guri Emir and Bibi Khanum Mosque.  Registan Square, this is pearl of Samarkand and one of the most majestic territories in the world. Who has visited the territories of Registan should be admired by beauty and magnificence of this territory. Architectural complex of Shakhi-Zindeh represents a big collection of mausoleums dates to 11th-15 centuries being a part of a UNESCO World Heritage Site. Gur Emir a masterpiece of Islamic architecture of the Medieval East. Night you will spend in the hotel.

Day 6: Samarkand - Tashkent
In the morning you will transfer to Tashkent (train).  In course of the tour you will discover Independence square which is main square of Uzbekistan which is situated in the heart of Tashkent. After you  will stroll along the local Broadway, on both parties of avenue artists sell pictures , here it is possible to look and buy various souvenirs, for example, national figures. After in the tour you will have an opportunity to take a ride in famous Tashkent metro. It has been opened in 1977 also became the first in the Central Asia. It is one of the most beautiful subways in the world. After you will walk around  the old part of the city which includes: Chorsu Bazaar, Kukaldash Madrasah and Hast Imam complex that consists of several madrasahs, mosques and mausoleum. The highlight of its exhibits is the Othman Quran outstanding and rare monument of history and the Islamic culture, stored in a special premise in madrasah the Barak-Khan in Tashkent, continues to attract today to Uzbekistan researchers, pilgrims and tourists from many countries of the world.Night is in a hotel.