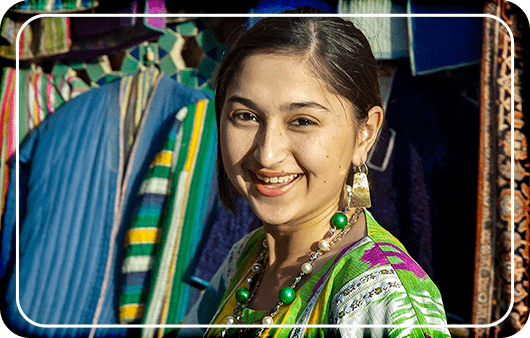 Day 1: Tashkent
Your wonderful starts with exploring Independence square which is the main square of the country. It is the central tourist sight of Tashkent with the delicate history lasting since a XIX-th century. Then you will have a chance to En route you will have an opportunity to marvel along the local Broadway, one of the best places of inhabitants. Your next destination will be Tashkent metro and there you will take a ride. Majestic columns, skilful bas-reliefs, picturesque frescos, magnificent chandeliers - all can be seen it, when you go down in the Tashkent underground. Further you will experience the old part of the city which includes: Chorsu Bazaar - the heart of east city, epicentre of public life, the supporter of Tashkent, Kukaldash Madrasah and Hast Imam. The highlight of its exhibits is the Othman Quran which is the world's oldest Quran copy dating back to 8th c. Represents exclusive value as the most ancient monument of the Arabian writing, an important historical source. This Koran is more than 1400. Overnight is at the hotel.

Day 2: Tashkent - Bukhara
Morning transfer (flight or train) to Bukhara. As each day of excursion takes you to a different location, you will get a chance to see the amazing and sometimes surprising highlights. Your first highlight will be the most ancient citadel in Bukhara dating back to the 4th century named Citadel Ark. The fortress of Ark in Bukhara is located on a hill and represents earthen construction. Then the tour continues to Chashma Ayub. The mausoleum of Chashma Ayub has been constructed in XII century. After two centuries, Amir Temur has brought masters from Khoresm and has ordered to continue building construction. For this reason the mausoleum has lines, characteristic for the Khorezm architecture. Further you will walk along the shopping domes and visit one of the most famous madrasahs of Bukhara called Nodir Divan Begi , famous central sightseeing of Bukhara. The tour will end with visiting Poi Kalon complex, it is a majestic column which towers over all city. It consists of three structures built in the 12th - 16th centuries: Kalon minaret, Kalon mosque and Mir Arab Madrasah. Night is in a hotel.

Day 3: Bukhara
You will have a city tour today in sacred Bukhara. Bukhara - a city, the name which in transfer is meant «successful district». The city has found the world popularity that throughout millenia brought the considerable contribution to development of spiritual, cultural and religious values of a world civilisation, became one of sacred places of Uzbekistan. First you will visit Bahauddin Naqshbandi complex, the mausoleum of sacred Bahouddin Naqshbandais considered the Central Asian Mecca. Here come believers from the different Muslim countries to ask executions of desires and disgust of sins. In course of the tour you will drive to see the countryside residence of Bukhara Emirs named Sitorai Mohi Hosa complex. The country residence of the Bukhara emir, is built in the end of XIX - in the beginning the XX-th century.  Now settles down the arts and crafts museum.  In the end of your tour you will drive to Sumiton village to find Chor Bakr memorial complex, the town of the dead. Chor-Bakr - the unique architectural ensemble erected in XVI century. It is possible to name it a Dzhuibar family cemetery  - the most influential dynasty of sheikhs of Bukhara. Burial places represent stone constructions with small court yard. After excursions you will return to city. Night is in a hotel.

Day 4: Bukhara - Tashkent
This day you have a morning transfer (flight or train) to Tashkent. First you will visit Courage Monument, in 1976 on a place of epicentre of earthquake has been erected the Monument "Courage" symbolising firmness of spirit and boldness of people before elements. Then the tour continues to Zangi Ota memorial complex. The mausoleum of Zangi Ota is a majestic construction, with a minaret, a mosque of Namazgoh, an internal court yard and inhabited cell.  You will also explore the State Museum of Timurids'. Museum in the centre of Tashkent, dedicated to history of Central Asia in Amir Timur's board and representatives of the dynasty. The city tour will be completed by visiting the State Museum of Applied Arts of Uzbekistan,  has been built in 1918. The basis of its initial collection included 100 products of a sculpture, painting, a drawing, porcelain of Russian and West European masters. Night will be in a hotel.