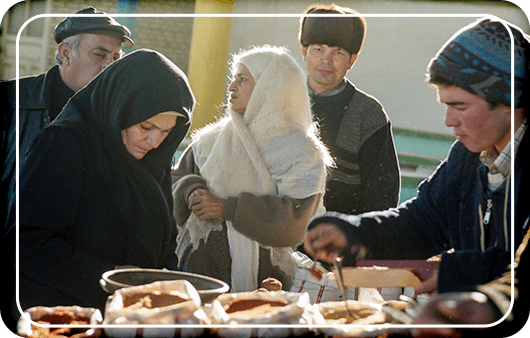 Day 1: Tashkent
This day you will start with the outstanding sight Independence square which is the main square of the country. Townspeople often gather here to celebrate national holidays and here reigns pleasant atmosphere. In course of the tour you will walk along the local Broadway, it connects 2 most important and beautiful squares of capital: Amir Temura's square and the square of Mustakillik (Independence square).You will have a chance to see Tashkent metro and take rde in it. It daily pleases with the beauty inhabitants and surprises visitors of capital. In tour you will explore the old part of the city which includes: Chorsu Bazaar, Kukaldash Madrasah and Hast Imam complex that consists of several madrasahs, mosques and mausoleum. The highlight of its exhibits is the Othman Quran which is the world's oldest Quran. Othaman Quran dated VII century, is stored in madrasah Mui-Mubarak, in a library building, in the special place where is supported the certain temperature mode and humidity. Night will be in a hotel.

Day 2: Tashkent - Bukhara
You will transfer (flight or train) to Bukhara today. Today there is the option to take an excursion out of monument in this wonderful city. The first remarkable point is the most ancient citadel in Bukhara dating back to the 4th century named Citadel Ark- last witness of board of Bukhara emirs. In course of the tour  you will visit Chashma Ayub, the place is sacred for three religions. The construction has prism outlines. The architectural masterpiece of Chashma Ayub is decorated by majestic domes, various under the form. Then you have a chance to walk along the shopping domes and visit Nodir Divan Begi, from 1993 year  is protected by UNESCO. The educational institution has been constructed in the beginning of 16th century by the initiative of the vizier which name it carries. At first settled down the caravan-shed here, but later it has turned to Muslim spiritual school. The tour will end with visiting Poi Kalon complex, the Central architectural complex of Bukhara, located on the main Registan square. It consists of three structures built in the 12th - 16th centuries: Kalon minaret, Kalon mosque and Mir Arab Madrasah. Night is in a hotel.

Day 3: Bukhara
Today you will plunge into wonderful sightseeing tour in the vicinities of Bukhara. Bukhara remained a fertile oasis, the large scientific and cultural centre on the Great silk way.Each span of sacred Bukhara, its each monument testifies to outstanding talent of founders, their successes in the field of a science and education, spirituality and culture, philosophy and religion.  First you will visit Bahauddin Naqshbandi complex, located few kilometers from Bukhara. The major Muslim relic is the memorial complex of Bahouddin Naqshbandi. Each Moslem respecting knows and esteems this name. Sheikh Bakhauddin Nakshbandi was one of the spiritual masters of Amir Timur.  Today complex includes mosques of Kushbegi and Muzafarohana, courtyard with pool, madrasah, and burial vault of Bukhara emirs and Dakhma upon the tomb of Saint Bakhauddin Nakshbandi. In course of the tour you will depart to the countryside residence of Bukhara Emirs named Sitorai Mohi Hosa complex. The wife of Emir lived short and died at young age, and the construction has been named by her fine name. «Sitorai Mochi Hosa» in a literal translation  means «the Palace of the Star similar to the Moon». In the conclusion of the tour you will drive to Sumiton village to explore Chor Bakr memorial complex, Chor-Bakr - the memorial complex located approximately in five kilometres to the west of Bukhara in settlement Chorbakir. It has also other name - «the City of dead». The complex has the big historical value and is under UNESCO protection. After excursions you will come back to city. Night is in a hotel.