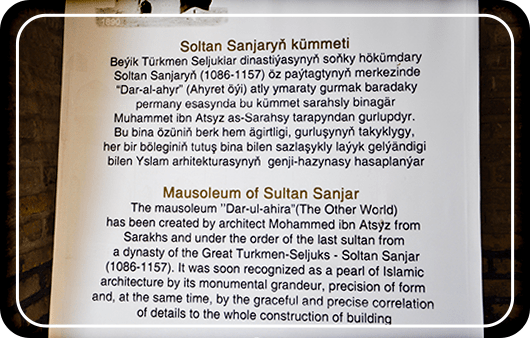 Day 1: Ashgabat
Upon arrival to Ashgabat International airport your tour guide will meet you. You will start your tour visiting the highlights of the city. En route you will visit the parks and squares of the capital, Ertogrul Ghazi mosque - the mosque  is the biggest mosque of Ashgabat and can contain simultaneously to 5 thousand persons. It is constructed in Turkish style, the archeological site "Nisa, In a city have been concentrated palace and temple constructions, settled down the treasury, huge storehouse of wine and warehouses with provisions. Then visiting Turkmenbashy spiritual mosque in Kipchak. The mosque of Turkmenbashi Ruhy is national property and pride of the Turkmen people. Night will be spent in a local hotel.

Day 2: Ashgabat - Kov Ata - Nokhur - Ashgabat
Today you will explore Kov Ata underground lake, is filled by warm curative hydrosulphuric water.  Underground lake Kov Ata - wonderful creation of the nature which can be called as one of miracles of the world. It is the brightest and unforgettable impressions for tourists in Turkmenistan. The name of the lake Kov Ata means Father of caves. In tour you will explore the village itself fills a small depression valley in the mountains of the Kopet Dag Range, and the houses have been built by local boulders, cemented with mud. Extraordinary on the beauty and culture the region occupied by Turkmen people of a mountain tribe Nokhur which have kept through centuries the original culture, traditional crafts and original architecture.  Drive back to Ashgabat. Overnight will be in a hotel.

Day 3: Ashgabat - Mary -Merv - Mary
After breakfast you will drive to Mary. In course of the tour you will explore Seyitjemaleddin Mosque, Nedir sha fortress and Abiverd historical place-the site of ancient settlement of Abiverd is one of eight historical reserves of Turkmenistan.  Upon arrival you will transfer to ancient Merv the most ancient known city of the Central Asia standing on river bank Murgab in a southeast part of Turkmenistan. After you will  visit Sultan Sanjar Mausoleum the most majestic architectural monument of Merv, Mohammed bin Said Mausoleum,which ńauses admiration of the outstanding architectural decision, medieval castles - "Kesk" - Gyz Kala, Small Kala- fortresses (6-7 centuries) and others. Night will be in a hotel.

Day 4: Mary - Turkmenabad - Koytendag
The tour starts with visiting  Repetek biospheric reserve. It is located in the desert centre East Karakum. The reserve was created in 1928 on the basis of an existing research station. In 1979, it received the status of "biosphere". En route you will on looking round museum and territory of the reserve. In the end of the excursion you will drive to Turkmenabad. Drive to Koytendag. En route visit Kaynar Baba lake. It is very popular place not only among local people, but also in all country. Overnight.

Day 5: Koytendag
You will transfer along the Koytendag mountain gorge in the morning. The ridge is cut by many deep gorges with steep cliffs, where sometimes the sky is visible only as a narrow strip above your head. The stone peaks are covered with various grasses, flowers and bushes. In addition, mulberry trees, plane trees and various fruit trees are often found in these mountains. The deepest lake, the longest caves and the most majestic natural waterfalls in the country are situated in this area.  Koytendag Nature Reserve is the huge geological research center, the pride of which is the rocky plateau with hundreds of dinosaur footprints.  After you will explore "Forty Girls" Gorge, "Plateau of Dinosaurs". In the end of the tour you will explore UmbarDere waterfall 27-meter, fed by the waters of melting snow in the Kugitang mountains. Overnight.

Day 6: Koytendag - Turkmenabad - Ashgabat
Today you will head on to Turkmenabad early in the morning. It is the second largest city in Turkmenistan. The history of the city has its roots in the distant past. The first mention of a settlement on the site of modern Turkmenabad dates back to the XVI century AD. In the tour you will explore Astana Baba mausoleum consists of mosque and tomb. After you will drive to Turkmenabad airport and have a flight to Ashgabat. Night will be in a hotel.

Day 7: Ashgabat - Dashoguz - Kunya Urgench - Darvaza
The tour starts with checking out of hotel and drive to airport for a local flight to Dashoguz. You will visit the architectural monuments of Kunya-Urgench, ancient settlement of medieval Urgench. Already in the X century. Urgench was the largest and second most important city of medieval Khorezm. Historical Parkincludes, the mausoleums of Najm al-Din al-Kubra KhanumTyurabek, Il-Arslan, Tekesh Ibn Hadzhibey, the highest minaret in Central Asia KutlykTimur. That's what you will explore. In the tour you will discover  Darvaza - Gas Crater, sinkhole on the territory of a massive natural gas field in the Zaunguz Karakum which is located 270 km to the north of Ashgabat. Overnight will be the tent.

Day 8: Darvaza - Ashgabat
Today you will head on to Ashgabat. En route you will visit the villages Bahardok or Erbentto  you will have a chance to feel way of life Turkmen people. Ashgabat is the capital and largest city of Turkmenistan. Ashgabad - a large administrative centre, a dream and love city, a magnificent architectural ensemble. In course of the tour you will have a chance to explore attractions : Ertogrul Gazy Mosque,  beautiful monument of Akhalteke horses, park of "Ylham" (Inspiration), "Altyn Asyr" trade market- "Golden age" is the first largest market in Ashgabat and Turkmenistan, and the 5th in Central Asia and "Gulustan" market the central city Bazaar of Ashgabat, one of the largest in the capital.

Day 9: Flight
In the morning transfer to Ashgabat International airport.