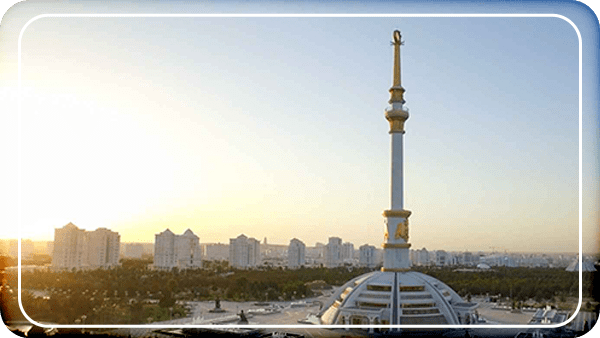 Day 1: Ashgabat
Upon arrival, local guide will welcome you at the airport and accompany you to Ashgabat, the capital city of Turkmenistan. Today you will explore the city and have an interesting sightseeing tour. The city's story goes back to 1881. Ashgabat situated near the Iran border, on the foothills of the Kopet Dag. In translation from Persian language, "eshg" means love, and "abad" is for populated land, so literally it is the city of love. City sightseeing will include travelling to the worldly known marble faced public buildings in Lenin's square, Arch of Neutrality, Park of Independence (similar to a white-marble "Eiffel Tower" standing in the center of the park). Then you will have informative excursion in Museum of Ethnography and Museum of Fine Arts. Night in a hotel.

Day 2: Ashgabat - Merv - Mary
Today we will explore the eastern part of Turkmenistan and traces of ancient trade road. The first site of the tour will be Abiverd fortress. It has the same importance as many other remarkable site like Merv, Kunya-Urgench, Nissa, Dakhistan. Abiverd lies on the way from Ashgabat to Mary. In addition to fort, there are remains of old Seyit Jamal-ad-Din Mosque dating back to 15th century. In 1456, Mohammed Khudaiot supported this mosque's construction. Further, go on to Mevr. It was one of the largest and most developed cities on the Silk Road. Mevr had significant role in Islam World together with other Islamic cities Cairo, Baghdad and Damascus. In Mevr you will also see Gyz Gala, Erk Gala, Soltan Gala, Soltan Sanjar Mausoleum, Ibn Zeid Mausoleum. Then drive to Mary. You spend night in a hotel.

Day 3: Mary - Ashgabat - Darwaza
Morning flight will take to capital city. After arrival, you continue your journey to "Bahardok" village. It is located in the Northern Turkmenistan. Here you will have a chance to see the life Turkmen people. Afternoon, you will continue your tour and travel to the north of Ashgabat to famous Gas Crater - Darwaza. The best time for exploring this place is evening of the tour. The stunning beauty of flames will charm you. Night in a tent near the crater.

Day 4: Darwaza - Ashgabat - Nisa - Horse farm - Ashgabat
In the morning, you leave to travel from Darwaza to Nissa fortress. It was the Parthian Kings' Sanctuary. Nissa was listed into the UNESCO World Heritage Site in 2007. In addition, we will have opportunity to see famous Turkmen horse farms. Turkmen breed- Akhal Teke is an honor of the country; here there will be short show of graceful horses and participate in Traditional Tea party. Return to Ashgabat. Stay in a hotel.

Day 5: Flight
After your enjoyable tour, you will be transferred to the airport. End of your travel in Turkmenistan.