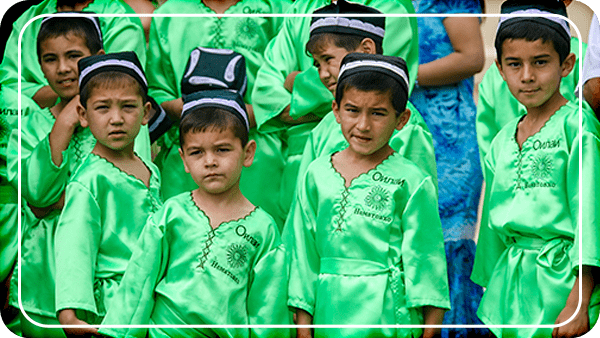 Day 1: Kyrgyz border - Karakul Lake - Murgab
Today you will get acquainted with driver at the border and head on to Murgab. The road runs over mountains and high passes. On the tour you will observe breathtaking views and panoramas.  The road will go over Taldik pass, one of the most popular passes. Its streamers can be seen in set of photoreports of travellers, and its height makes 3 600 metres. The pass Taldyk is original fence of one of the most high-mountainous and beautiful roads of the world - the Pamir Tract. Right on the highway of the Pamir Tract is situated the light-blue lake of Karakul (3, 815 m), the name of which can be translated as "The Black Lake". This is largest drainless lake.  In course of the tour you will head to Murgab. Murgab - high-mountainous village in the east of Tajikistan, 3600 metres located at height above sea level. At such height there is no any vegetation, and people cares trees as small children. In other name people call this place "The Roof of the world". In the tour you will drive over the highest Ak Baital pass (4 655 m). The landscape of Murgab is looks like to the surface of the Moon. Night will be in the cozy guesthouse.

Day 2: Murgab - Yashil Kul Lake - Bulunkul Lake
The tour continues and today you will embark into the charm beautiful lakes of the Pamir. Yashil Kul(Green Lake) and Bulunkul (Blue lakes), stretched on the altitude of 3 700 meters above sea level, water pure and transparent in its thickness it is possible to see flocks of fish. Today we will spend a night near them. The lake Yashil Kul was formed as a result of a blockage which has partitioned off the river Alichur. Water is poured through a blockage, and from this place originates the river Gunt .Among local population there is a legend about existence of a huge animal - «a water camel» who, lives in lake. The color of water in Bulunkul is a subtle inter-play of violet and dark-blue in the sunlight. Species of fish like are found in abundance in the lake.In course of the tour you will meet yaks. Shaggy yaks possess a number of the valuable biological features facilitating their maintenance and cultivation. On the way to the lake you will drive over Naizatash pass (4 137 m). Dinner and night is in a homestay.

Day 3: Bulunkul - Yamg
The tour starts with driving to Yamg.  On the way you will drive over Khargush pass (4 344 m). Pamir is an edge which since the most ancient times connected the Western Asia with the classical world, with deep Central Asia and the Far East. Edge on which lay one of the most important and brisk ways of an antiquity and the Middle Ages. Describing Pamir, Marco Polo said that in a valley excellent pastures, there are many animals. On the Great Silk way the trading caravans delivering the big consignment of goods followed, cultural and economic achievements of the ancient people extended, pilgrims moved to holy sites. Night is in a homestay.

Day 4: Yamg - Khorog
The tour continue with driving along Tajik-Afgan border to Khorog. Khorog - very beautiful, green city with huge poplars and unusual traditional Pamir houses on suburb.Situated in the heart of Asia. There are the constructions typical for the Central-Asian region combining traditional Pamir houses and buildings of the Soviet style. The city centre (along the Pamir Trakt) completely consists of the Soviet buildings, quite usual, however along the river and on hills over a city is constructed the set of unique and colourful Tajik houses with the big terraces. Night is in a hospitable guesthouse.

Day 5: Khorog - Kalai Khum
In the morning you will drive to Kalai Khum village. Kalai Khum is a small village, and one of the first settlements on a route on the Pamir Tract after Dushanbe. Kalai Khum is located directly on border with Afghanistan, and there is located one of three bridges through the river Pyanj. Today Kalai-Khum is silent cozy small town with the population of 1600 persons in which it is possible to find some guest houses. The visitors and inhabitants usually wonder the beauty of virgin environment. And you will have a chance to learn about the ethnography, historical past and everyday life of mountain. En route you can stop in small settlements to communicate with local people and to feel the way of life. Human settlements are located on both sides of the river in narrow mountain valleys. Night is in a home stay.

Day 6: Kalai Khum - Norak - Dushanbe
Today you will transfer to Dushanbe. This day you will end your travel along Afghanistan border. In course of the tour you will run over Shuraba pass (2 267 m). This is really touching road which impress people, with fabulous beauty. A lot of the world's greatest explorers such as  - Marco Polo, Hsuan Tsang, Mirza Muhammad Haidar  were really impressed by magnificence of Pamir and traveled in it. Today you have a great opportunity to travel in Pamir and marvel the majesty of mountains. Natural border - Pyanj River, that's what you will pass. Extraordinary severe climate is accompanied by various enough structure of fauna. Especially remembered animals are arhali - the large mountain rams which one horns can reach thirty kgs of weight. And also shaggy yaks and a handsome snow leopard. At various heights live some kinds of goats, marmots, rams-urmaly, foxes and the Tibetan wolves. In tour you can overlook Norak water reservoir that is called Tajik Sea. Night is spent in a hotel.

Day 7: Dushanbe
To be well- oriented in the history, you will have a sightseeing tour today. Your remarkable sights will be  Rudake Park, National library(this is biggest book-depository of the country, it is recognised as important object of a cultural heritage), White House(This is most beautiful monumental building which is considered the pride of Tajikistan), National state seal, and House of parliament.In the tour you will stroll in National park and overlook National Flag, Central Museum. In course of the tour you will visit to Gurminj Museum of traditional musical instruments, operates since 1990, on the basis of a private collection of Gurminj Zavkibekov, talented national actor. A collection which totals today more than 200 exhibits from all Asia,he started to collect from early age. En route you will explore colorful Asian bazar. There are you can buy colourful goods. Night will be in the hotel.

Day 8: Flight
In the morning is transfer to the airport.